Stronghold: Crusader is the successor to Firefly Studios's 2001 real-time strategyvideo gameStronghold.[2]Crusader has much in common with the original Stronghold, but differs from its predecessor in the fact that the game is no longer set in England, instead being set in the Middle East during the Crusades.[3] Another prominent addition not found in its predecessor is a skirmish mode in single-player, allowing customized battles with AI opponents instead of the linear campaign. The game was also released as Stronghold Warchest. This version was a compendium of Stronghold and an enhanced version of Stronghold: Crusader, containing additional characters and an additional Crusader Trail.

Stronghold Warchest was only released in a limited number of countries (e.g. USA or Poland), meaning players in the rest of the world have never encountered the second Crusader Trail, or second set of characters. This changed when an updated version of Stronghold Crusader, Stronghold: Crusader Extreme was released in early 2008.

The gameplay is similar to the original Stronghold, the major difference being that the game is set in the Middle East. As a consequence, farms can only be built on oasis grass, which leads to rivalry among players for limited farmland and resources. The game adds new AI opponents (the number depending on the version of the game) and several new Arabian units purchasable from a mercenary post. The colour of the player's units have also been changed from blue to red in order to match the colours of the Knights Templar. Other than farms there are other resources such as iron ore, quarry (for stone), and marshes (for oil). These resources are deposited on the stockpile and the player can choose to either sell or use them for defence purposes. There are two ways to build an army; either make the weapons and then spend a little gold to turn peasants into soldiers, or turn them directly into soldiers using more gold via the mercenary post.

There are historical chapters (mostly fictionalized) which are to be completed using the resources given to the player at the start of the missions. Along with that there are 50 levels designed with increasing difficulty. In each level, the player must defend the kingdom and defeat one or more Kings. There is an option of three chickens at the start of the game which the player can use to skip a particular level.

There are 30 additional levels added by the developers in the form of an additional Crusade Trail. The design of these mirrors the original 50 levels with the difficulty raising as the player progresses through the levels.

The game contains several different characters that all appear as AI-controlled lords in the Skirmish mode, available to be selected as allies or enemies. One unique aspect of the game is that the characters have individual binks (small short videos) by which they communicate with the player, asking for goods or help if allied with them or, if they are the players' enemy, taunting them when attacking or expressing worry when under siege. These videos were absent for Stronghold 2 but returned in a new form for Stronghold Crusader II.

In the base game, eight AI lords are available, including the opponents from the original game (The Rat, The Snake, The Pig, and The Wolf), as well as new Arabian and Crusader lords (Saladin, Richard the Lionheart, The Caliph, and The Sultan). With the Warchest edition, eight additional lords were added. Three of these (Emperor Frederick, King Philip, and The Sheriff) were made available by Firefly as a free download, but the five others - The Wazir, The Emir, Nizar (based on the real-life Hassan-i Sabbah), The Marshal (a repurposed Sir Longarm from the original Stronghold), and The Abbot - had to be obtained via buying the Warchest package. These additional lords were, however, properly included within the game's later release on Steam at no extra charge.

The game received 'generally favorable reviews' according to the review aggregation website Metacritic.[4]

On January 28, 2008, Firefly Studios announced an expanded version of the game: Stronghold: Crusader Extreme. It boasts 'new AI opponents and maps', a 'new crusader extreme trail', 'battles featuring over 10,000 units' and Windows Vista compatibility.[15] It was released in June 2008. 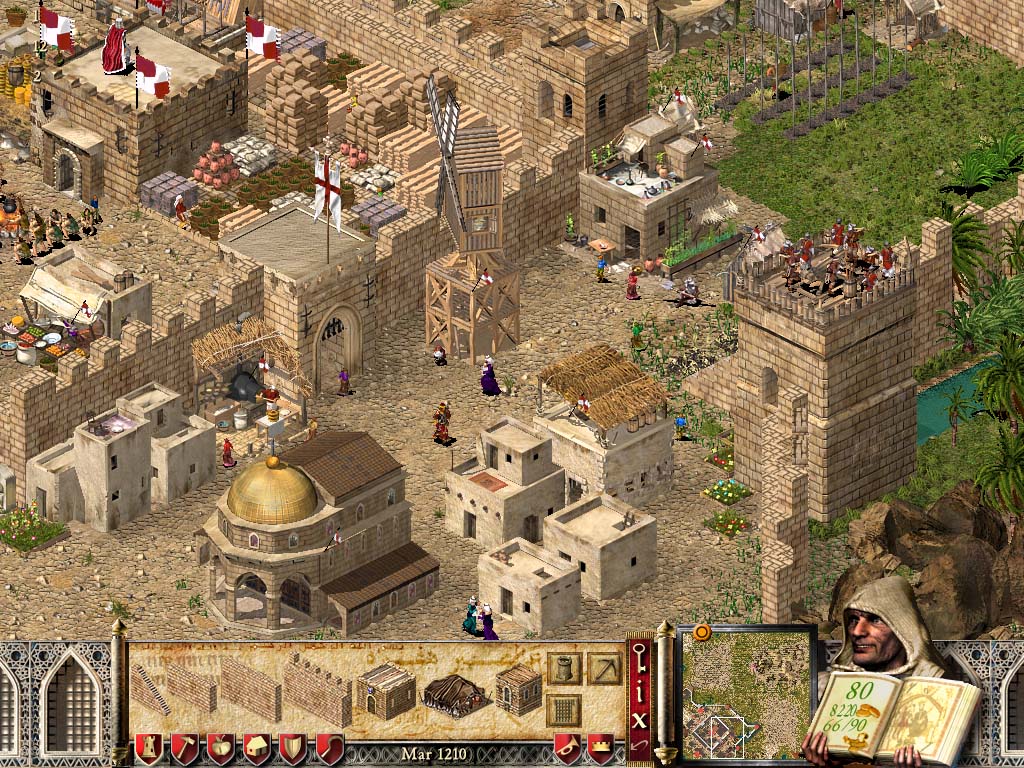 The Extreme version received 'generally unfavorable reviews' according to Metacritic.[17] It was criticized for its extreme difficulty, lack of new audio, and not having graphical quality up to par for a game released in 2008.[citation needed]

On August 30, 2012, Firefly Studios announced Stronghold Crusader II, a sequel to the original Crusader game. The company said that the game would be self-published, with additional funding to be sourced via crowd-funding site Gambitious.[23][24][25] The game was released on September 23, 2014.