Shinobido Way of the Ninja PS2 is a action Stealth game for PlayStation 2. This game is developed by Acquire and published by Spike, Sony Computer Entertainment.

PS2 ISO are playable on PC with PCSX2 Emulator

For Extracting Rar File Use WinRAR or 7zip

At first glance, Shinobido is to Tenchu what Saint's Row is to Grand Theft Auto. If you ask Volition, GTA is a genre, and Saint's Row is a game in it. If you ask me, that's nonsense - but you can understand why they'd want to make the argument. GTA is a wonderful template with room for improvement. Tenchu, you're expecting me to say, is not.

Well, there are two things wrong with all of that. First, Tenchu, which gets 7/10 on a good day even though it hasn't had any lately, is actually a lacklustre game with tons of room for improvement. Second, the team stepping in to try and make this point is Acquire, and since Acquire did the last decent Tenchu anyway (the current crop is in the inconsistent hands of fellow Japanese From Software), you can't really blame the team for making a game a lot like it.

Shinobido takes what Tenchu was doing and builds on it. It maintains the thrill of the hunt - the thing that's always carried Tenchu along in my affection - with plenty of room for skulking across rooftops, luring guards away from the herd with tasty treats and unexplained noises, and then slaughtering them out of sight. Stalking and misdirecting your way to perfect, invisible executions was always satisfying sport, and Shinobido gets this quite right.

There are slight differences in this area but they don't make much actual difference, if you see what I mean. A compass in the top-right is used to gauge the nearest guard position, while little eyes appear in the top-centre to indicate the nearest guard's alertness level. If you're spotted, or he confronts you, it goes red, and he'll start searching for you as you make a getaway. Keep it purple and you're, er, golden. Once you're in a position to strike, you can leap onto shoulders and score windpipes like a can opener, or simply sneak up behind and draw your blade across throats. It's all as simple as hitting triangle at the right moment, whether airborne, running, or creeping. You can then either dispense with bodies by hauling them away with triangle (the all-purpose pick-up button, outside of death-dealing) or move on anyway.

Where Shinobido distinguishes itself is in structure. Instead of a linear group of missions, the main story mode sets itself up with a playable prologue (effectively there to demonstrate the core death-dealing mechanics, although there are tutorial videos afterwards to ram the points home if you had trouble) and then gives you almost free reign over what you do. Stuck in the middle of three provincial warlords, you get to side with whichever you like, or work for them all, and your success or failure in helping them fosters respect. The ultimate goal is to recover soul pieces - something the warlords will separately help you with - so that you can regain your memory. Please ignore the 'amnesia' thing though - it really is best forgotten [just as well - Ed].

Successful completion of the warlords' missions means more (and more challenging) work, while failure usually means losing a few items as well as a bit of respect. Equally important, in some cases, is avoiding detection; if you're constantly seen working for the other side, it can be as bad as failing missions and negates the benefits of moonlighting. Once settled in, I expect most first-time players will probably opt to pick a side, while veterans will find the opportunity to play people off against each other from the shadows eminently more exciting. It's a nice mix, actually, and with three core difficulty levels underpinning things, Shinobido is actually more approachable in some senses than its ilk.

The level hub is your home in the middle of a forest, from where you can purchase and equip various items (along with health potions and weapons, there are all the usual tools of distraction), read your post and the local news (which helps you ascertain how happy/pissed off everyone is with you), and tend to your garden. The garden's a little ninja playground, which you can reshape as you see fit - and occasionally have to defend by butchering barbarians who come round to pinch your equipment. Another thing you can do here is send things to your warlord employers, which again contribute to their levels of respect for you (assuming they need some 'confusion weed', obviously).

Trouble soon arises though, because while Shinobido builds on Tenchu, it doesn't really do anything to fix it, and some of its own choices are a bit dim (well, everything's dim in the world of the ninja, but you get the point). Combat, outside of stealth kills, remains fairly poor. You can perform a three-hit combo with your sword using the square button, with new moves later on, but in general you'll just want to leg it, and getting away when you're spotted is a pain and upsets your quest for perfect stealth. It's like accidentally nudging a domino too early, and then having to hide behind a tree until somebody's set them all up again.

That's more of a problem with being a ninja though, and I guess I have no better solutions than Acquire's anyway, but it could certainly have done something about the camera, which is as incontestably awful as ever. You can dip into a first-person view using R3 to help, but for the most part you'll use third-person. Since you spend a lot of time on rooftops, you're constantly wrestling with it trying to get a good view of what's happening below, and it's even more frustrating in the close confines of alleyways and interiors. There's an L1 lock-on to help with surveillance, but it's like a plaster on a stab wound.

Generally the controls are all right, if a little clunky and archaic. There's still no analogue control - you're either running or not, and the modifiers for creeping and running faster are on R1 and circle respectively - while combat controls see you refusing to switch direction in between quickly-strung sword combos, and inventory management (especially while sidling along a wall) is ninja-esque only in the expectations it has of your fingers. Fortunately the bread and butter - stealth killing - rarely frustrates, even when you're trying to leap and kill from a distance, but as with Tenchu it's not so much the core thrill that upsets the player, it's everything else. Leaping onto someone's head and dispatching them inches from another guard is fine, apart from the moment of panic when the animation ends, the camera's facing you rather than following you, and you've got to figure out whether it's left you exposed.

It's also hard to enjoy Shinobido's attempts to steer away from stealth killing. Theft without violence is quite interesting, and contributes to that sense of rooftop mastery, where the slightest foot laid on the turf below feels like a badge of shame, but the delivery and transport missions in particular are silly. These often consist of hauling an enormous wooden chest around a map, which inhibits your manoeuvrability and range of vision - things with which Shinobido definitely shouldn't be messing with.

Even so, Shinobido's oddly compelling, and grows in your affection the better you become at evading detection and making a kingdom of the rooftops. The repetition of certain levels may jar after a few hours, it looks more like a PSone game than a latter-day PS2 title, enemy AI is as helpfully stupid as ever, and I'm surprised I've got this far without complaining about the total lack of variation in kill animations, but if you can wrestle your own perspective into looking past a few basic flaws, this is an enjoyable ninja playground, even if it badly needs somebody to come in and reprogram it from the ground up. Score-wise, it sounds like a 6, but I like it like a 7, so that's what it's getting. 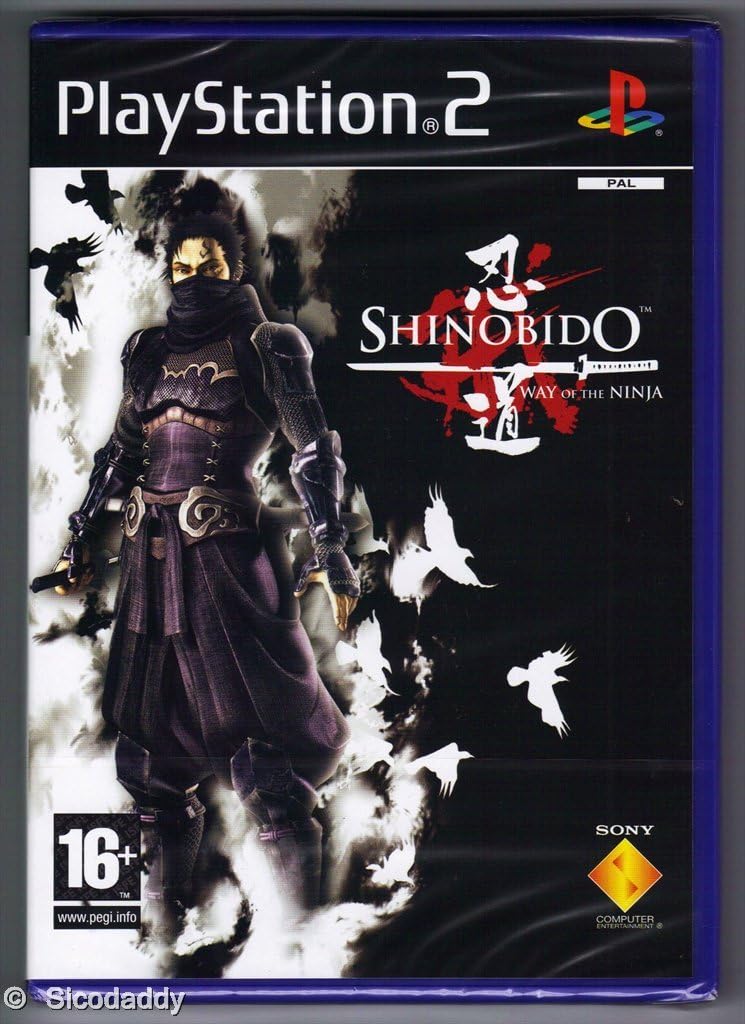