As NBA Live moves into its '2005' season, the gameplay above the rim takes center stage. The game's new 'Freestyle Air' features allow gamers to take control of their NBA players in mid-flight, to block shots, score tip-in rebounds, and perform stylish dunks. The last ability helps support the game's new 'All-Star Weekend' mode, which allows players to take part in a virtual re-creation of the league's annual, mid-season celebration, which is highlighted by the slam-dunk contest and three-point shot competition. Offering far more than a weekend of stunts and tricks, however, NBA Live still presents a full-featured simulation of the entire NBA season, or even as many as 25 seasons, in the returning Dynasty Mode. Gamers who decide to take complete control of their teams in this mode will manage a great variety of franchise functions, from game plans and scheduling to salary requirements and trades. One of the sport's most famous announcers, Marv Albert, resumes his place behind the NBA Live mic, joined by his regular play-calling partner, Mike Fratello. All-Star Weekend events are called by TNT's Ernie Johnson and Kenny Smith.

It's easy to declare EA the undisputed king of basketball simulations on the PC. Unfortunately, that's because NBA Live's main competitor, ESPN NBA 2K5, doesn't exist for the PC. It's a PS2/Xbox-only title. So that leaves the few remaining PC enthusiasts who also happen to be basketball fans with pretty much one option. Fortunately, that option turns out to be pretty good.

NBA Live 2005 picks right up where 2004 left off. The graphics are moderately improved but still somewhat lacking, the multiplayer is still quite functional (although there are surprisingly few people online to play it with), and the basic mechanics of the basketball simulation itself are largely unchanged. Players have the option to choose from several offensive patterns, including pick-and-rolls, isolation setups, post-ups, and more. (There's full keyboard support, but as with most PC sports titles, we definitely recommend a dual analog gamepad.) You're also free to choose between various full-court, half-court, and zone defenses. Players will fight for position down low, jump into the lane to take charges, feint to throw their man off balance, and in general perform very well. This is all stuff that appeared in 2004's entry and has been left untouched or only slightly refined (for example, collision detection is somewhat improved). There are only a few real differences.

First: Stealing is much more realistic. In 2004, it was possible to rack up a ridiculous number of steals per game simply by double-teaming whoever had the ball at any given time. In 2005, a player is required to really keep an eye on the passing lanes and move to intercept. Tying players up in a double almost always results in a quick outlet pass to the open man. 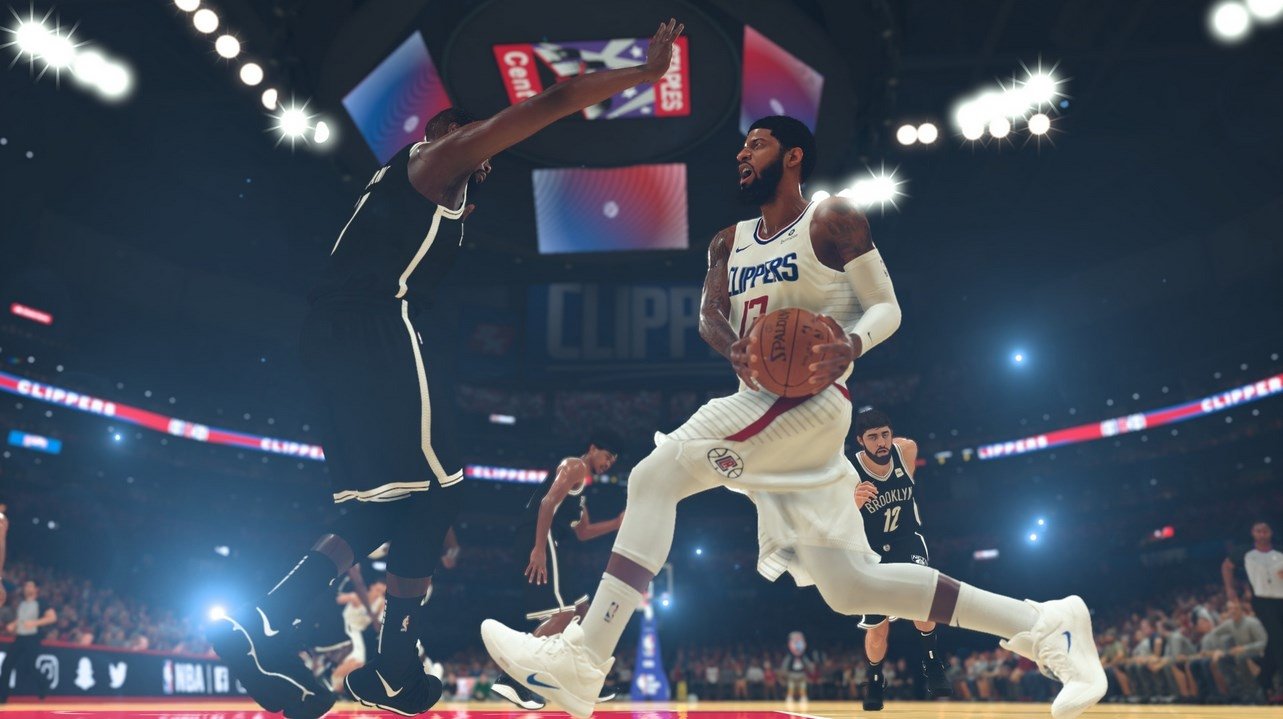 Second: The power-hop is no longer the most devastating move in the history of video sports (right up there with the post-combo uppercut from Mike Tyson's Punch-Out!! and any pass play to Bo Jackson in Tecmo Bowl). Opponents now have a much higher success rate of tying a player up during the hop. This is a good thing, as it means you can only use the hop in situations where real players would employ it: an open or only partially clogged lane.

Unfortunately, because the actual simulation engine remains largely the same, it also features a couple of the same frustrating issues that last year's title did. For one thing, your computer-controlled teammates still play some of the worst defense around. Players leap to take charges when there's no point, and then step out of the way when a charge would be handy. It's also rare to see any sort of weak-side help should a man get beaten off the dribble (on the plus side, attacking a defense's strong side results in blocks and misses, as it should). Additionally, it's still altogether way too easy to make long-distance passes, particularly on the break. Most of these issues are minor annoyances though, and won't detract from your enjoyment too much. The real improvements in NBA Live 2005 come in two main areas: dynasty mode, and the NBA All-Star Weekend, and it's on these two subjects that we're going to focus, because they effectively make or break the game.

It's hard to understand how one EA Sports title (Madden) can be so far ahead of the others. NBA Live 2005 begins to close the gap, but it's still not really even close. That said, it's a massive leap over 2004's mode, which didn't even feature real dollars for salaries (using a confusing point system instead). 2005's dynasty mode adds a lot of great features, but also introduces a couple of new issues that I hope will be resolved next year.

The Good: Instant feedback has largely been removed. No longer can you make an offer to a free agent or a player in the last year of their contract and find out instantly if it was approved or not. The entire NBA off-season is simulated in a vastly superior manner to 2004, with specific days laid out for events like the draft lottery, rookie workouts, the NBA draft, and more. Player agents are willing to negotiate, and you can sometimes nab a player with a 'the ring's the thing' mentality for a bit below market value simply if your team has a history of being well-managed. Awesome.

Dynasty points are harder to acquire, which is also a plus, since in 2004 you could nearly guarantee a first-place finish once every three years simply by storing up points and then going berserk with them. Training means something, and player ratings -- even for your starters -- will degrade if you don't employ it. They also removed the obnoxious feature where training on offense had the chance of removing defensive points, and vice versa. The depth and ability of your bench also seems to factor more heavily into winning this year.

The Bad: While the overall interface changes are drastically superior to 2004, there are some issues. The PDA concept is both a blessing and a curse. Whereas in 2004, things like injury reports were delivered with a little pop-up notice WHILE simulating, they now appear as e-mail on your PDA and require a minimum of seven clicks. You're telling me that Larry Bird needs to wait for an e-mail to know that Jermaine O'Neal got hurt? I somehow doubt it.

Additionally, perhaps the most obnoxious feature in the game is the inclusion of e-mails from the team's owner -- a Mark Cuban-esque figure that seems to really want to do your job for you. He will pester you all season with reminders about scouting, use of dynasty extras, and training. He'll do this even if your team is in first place by 10 games, dominating opponents, and has three players on the All-Star team. Even worse, if you ignore these letters or delete them without reading, he'll send you more e-mails asking why you're not reading what he's sending you. This is one part of the realities of basketball that I could've done without.

Eventually, as you simulate your way through several years of play, you become adjusted to mindlessly clicking through the PDA system, and it doesn't eat LARGE amounts of time, but several aspects of it would've been better handled through pop-ups. The PDA is fantastic and realistic for things like negotiating with player agents. On the other hand, do I really need a screeching alert noise every time the NBA decides to let me know that a player on some other team hurt his ankle?

There are four events in NBA Live 2005's All-Star simulation. Sadly, these don't include the ridiculous 'Point Guard Challenge' or the annual 'Magic Johnson involved in something that reminds us of the depressing realities of aging' event. However, they do include arguably the four most important events: the rookie/sophomore game, the All-Star game itself, and the biggest additions: the three-point shootout and the dunk contest. More importantly, they feature the voice talents of TNT's Ernie Johnson and Kenny Smith -- two thirds of the best sports-broadcasting group in the history of television (if they'd managed to get Charles Barkley too, that alone might have added another half-star to this review).

The three-point shootout is pretty simple. Basically, your player moves automatically from rack to rack. All you're required to do is press the button to grab the ball, and press the button to shoot it. The skill aspect is in figuring out the timing for your particular player. Each has a different release point, and using the same rhythm for, say, Peja Stojakovic and Brent Barry isn't going to work for you. On the rookie skill mode, you'll be scoring 25+ points per round within a few minutes. On veteran or all-star, it's tougher to advance.

The Slam Dunk contest represents, after dynasty mode, arguably the most work that has been put into the game. Players are given control over an astounding amount of nuances, and the combination of dunks available numbers -- according to EA -- somewhere over 20,000. There are several tosses, from a straight 'off the backboard' toss to an insane 'behind the back, kick the ball, hit the scoreboard, then catch' option. Additionally, players are allowed four 'gather' moves with which to begin their dunk. These will start a player on one foot or two, facing toward or away from the basket.

Pressing another button will launch the player into the air and begin a dunk, the type of which is determined by which button has been pressed in combination with which gathering move. The game goes into slow motion, and the player must time the dunk. Too fast and you'll hit the front of the rim. Too long and you'll miss the dunk or give up entirely. During this slow-motion time, the player also has access to dunk modifier buttons which can be used to create 360-degree spins and other such displays.

In all, it's an impressive feature, and one that players will be far from mastering even after dunking until their thumbs hurt.

Improved graphics, a deeper dynasty mode, and an All-Star weekend simulator that's genuinely fun to play. Sounds like a slam-dunk, right? Well, yes and no. For hardcore basketball enthusiasts, there is no question whatsoever that NBA Live 2005 is worth the upgrade over last year's entry. That statement also applies if you're enough of a dunk fan that the dunk contest is a must-have feature for you.

If, however, you're a casual fan who just wants to play an occasional game of video basketball and doesn't really care about getting immersed in the nuances of the sport, you might be better off picking up a copy of NBA Live 2004 in the bargain bin.

But let's be honest: if you're playing video basketball on a system that's not hooked up to your TV, you're probably pretty hardcore. And if that's the case, then you should pick up NBA Live 2005. It's not without its flaws, but it's well worth the investment.

Storyline of the Game