ℹ️ As an Amazon Associate I earn from qualifying purchases. (details)

I was all set to write a review of the Baofeng BF-888S two-way radio, but then I found a much more thorough Amazon review, more detailed than I ever could have hoped to write. The review is from 2012, but it includes just about everything you'd want to know.

Go read that review, then come back for my commentary. 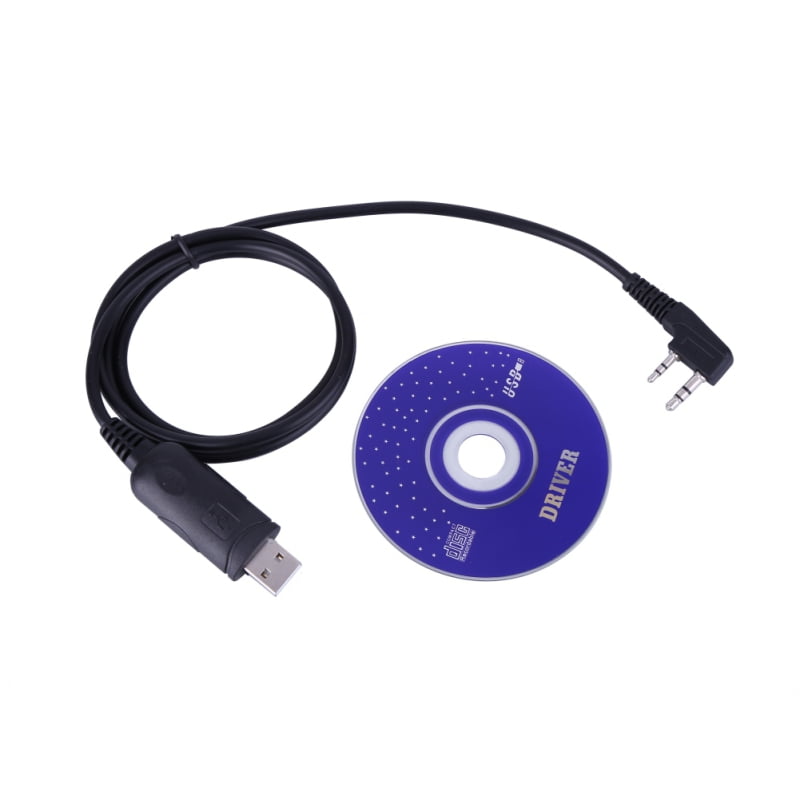 We were provided a set of these radios with a commercial equipment rental, to ease conversation between a few groups of remote operators where line of sight wasn't possible. Over the course of a few months, they haven't let us down.

When you buy half a dozen, it's like someone shipped you half a dozen bricks. The pictures speak for themselves.

In short, a small hand-held FM transceiver that operates in the 400-470 MHz range, programmable for 16 channels, etc. Universal Radio has a concise summary of the BF-888S.

The back plate of the Baofeng BF-888S includes the following details:

Interestingly, the frequency range and emission power recorded for the CMIIT ID don't match the back plate.

CMIIT reports far more limited capabilities. A little shady, perhaps. Or maybe just a different revision of the radio that was locked down a bit to help ease things in the US market.

At $10-12 per handset they're near-disposable, you can afford more of them. That changes the game about who you hand a radio to.

If you're licensed by the FCC for business usage within the 400-470 MHz spectrum, these serve as excellent backups. Or perhaps you provide these to vendors, contractors, or students, rather than handing over one of your more expensive handsets. If one walks away or gets broken, they're easy/cheap to replace. 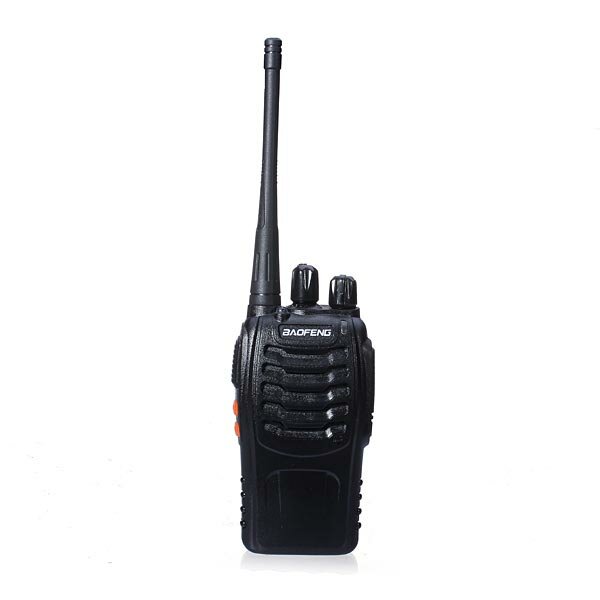 Once programmed identically, there's no settings for the user to mess with beyond the channel selection. That makes things easier for entry-level users and it's less headache for you: no need to worry about users accidentally changing CTCSS 'privacy' codes (that you'll inevitably need to reset), broadcasting at higher power than you're licensed for, or any other nonsense.

There is an LED flashlight, which I have found useful despite my initial feeling of disdain. But otherwise, there's no extra features to drain the battery, not even a status display, meaning more battery life dedicated to the radio components themselves.

Even with moderately heavy chatter you can easily get a full day's worth out of each 1500 mAh lithium-ion battery.

For the low cost, it's a suprisingly dense hunk of molded plastic. They've survived months of abuse at the hands of small children and teenagers alike, and I once dropped one of these handsets 20 feet onto a cured concrete floor. Short a few scuffs, it's like nothing happened.

The clips and supporting springs are strong. When installing the clip, do so without the battery inserted so you don't have to fight the spring. By comparison, I managed to break a belt clip on a friend's Motorola Talkabout after a few days light usage.

After years of use/abuse and numerous drops at the hands of dozens of teenagers, most of the damage consists of cosmetic scuffs, scrapes, and bent antennas.

The only structural damage I've seen on any of the radios has been a small chip on the side of the case; eventually another drop resulted in a broken chunk near the battery compartment, at which point the battery latch doesn't want to stay engaged (since the piece that would hold the latch in place is gone). A piece of gaff tape across the bottom keeps the battery engaged and otherwise the radio is still perfectly functional.

Everything is prone to break over time. Given the low cost of the Baofeng BF-888S, the build quality is still more than generous.

In an attempt to be a model citizen, I did a bit of reading on the Personal Radio Services before programming the radios, but I found the FCC regulations difficult to navigate.

I'm not an expert in the field, but I can say the flexibility of programmable radios could be a potential source of trouble for the consumer and a factor to consider when evaluating new gear.

Easy to use improperly

Mentioned in the Amazon review, but worth reiterating: if you live in the United States, you absolutely can't use the Baofeng BF-888S without breaking FCC rules. Not out of the box, anyways. The BF-888S ships from the factory with sixteen default/preset frequencies, most of which cannot be used without an FCC license and some of which will probably overlap with law enforcement and emergency services. Don't do it.

There are many products sold in the US that can be misused in a way that breaks a law, rule, or regulation. This just happens to be one of those items. The product isn't inherently evil, it's just a UHF radio that can be programmed to operate on a wide range of frequencies (many of which happen to be regulated).

Baofeng received FCC Part 90 certification for the BF-888S in October 2015 for use on commercial frequencies (Miklor, FCC). That isn't the same as FCC Part 95 for Family Radio Service (FRS), the part of the radio spectrum that most consumer walkie talkies operate on.

Breaking down what FCC says about FRS, piece by piece:

If you operate a radio that has been approved exclusively under the FRS rules, you are not required to have a license.

The BF-888S hasn't been approved exclusively under the FRS rules.

The BF-888S is capable of transmitting at higher power (2-5 watts, depending whether you believe the back plate or the CMIIT registry) and has a detachable antenna.

Radios that have been certified for use in the FRS may be found on the FCC website by using the page at https://apps.fcc.gov/oetcf/eas/reports/GenericSearch.cfm.

Consider what the FCC says about General Mobile Radio Service (GMRS) regulations instead:

If you operate a radio that has been approved under the GMRS rules, you must have a GMRS license. GMRS transmitters generally transmit at higher power levels than is allowed in the FRS and may have detachable antennas. (Note that some dual-service radios transmit with higher power on FRS channels 1 through 7; these radios can be used without a license only on FRS channels 8 through 14.)

The dual-service radios mentioned are everywhere and sold to consumers across the United States. If your Motorola Talkabout has a pair of high/low transmit buttons, technically you'd need a license to use them with higher power on channels 1-7. In practice, most consumers don't know anything about FCC regulations and few bother to acquire the proper GMRS license.

Effective September 27th, 2017 the FCC has consolidated FRS/GMRS channels. They now permit transmitting up to 2 watts on what used to be FRS channels 1-7 (and also channels 15-22), although it's still good practice to transmit on low power whenever possible to reduce your impact on other users.

Programming can be tedious

To program the BF-888S you'll need to buy an inexpensive programming cable which plugs into the BF-888S headphone/mic jack and connects to a USB port on your computer.

Baofeng provides programming software for Windows, which I didn't care to deal with. Alternatively you can use CHIRP...

CHIRP is a FREE cross-platform, cross-radio programming tool. It works on Windows and Linux (and MacOSX with a little work). It supports a growing list of radios across several manufacturers and allows transferring of memory contents between them.

Six radios, six reboots. Once you're done, you'll want to verify operation of every channel with a scanner. Six radios, sixteen channels each, that's 96 channels to check. A little tedious, but only required once.

A later revision of the Baofeng BF-888S includes the following on the back plate (other details unchanged):

Using CHIRP on Mac OSX, this version of the BF-888S did not work with the cheap programming cable mentioned earlier. Later revisions of the radio aren't as tolerant of the commonly-counterfeit Prolific chips found in the USB-serial cables.

CHIRP bug #4249 has a good discussion of the problem. If you're consistently seeing 'radio refused to enter programming mode' errors from CHIRP there's a good chance your cable has a counterfeit Prolific chip.

The Linux-based LiveCD still works. Alternatively, the $18 FTDI programming cable from Valley Enterprises works flawlessly on OSX out of the box, without any reboots required, and has nice LED status lights to indicate transmit/receive. If you're programming more than a few radios, it's a useful time-saving upgrade.

Important: When working with a new batch of radios, make sure you download the radio settings FIRST and then modify the CHIRP-created template with the relevant frequencies and settings. You can copy/paste frequencies from another template, but if you write an old template to a newer radio, settings could be lost.

The Baofeng BF-888S is a small, rugged, and capable UHF radio at an amazingly low price.

If you've got a GMRS license ($70 per 5 years per family) and do any kind of camping or hiking, what are you waiting for?

If you've got a license for business use in the 400-470 MHz spectrum, there's all sorts of uses for these.

If you've got the patience to program legal FRS frequencies and transmission power, be careful.

If you'd prefer to skip the programming and have walkie talkies that work out of the box, Baofeng isn't for you. Stick to the Motorola Talkabout series, just don't claim ignorance of FCC regulations if you happen to broadcast on high power on FRS channels 1 through 7.